A note for Kubernetes users

If you ever used Kubernetes before, you will find a lot of similar things when using Dora, like the CLI, the YAML files etc.

But apart from the interface similarities, Dora is a different system, much more easier to develop and to maintain and oriented to GPU clusters and AI workloads.

We have tried to provide a similar interface because we use and love k8s, but we wanted also to build a system that can be used with little effort by everyone. For instance, you will not find Pods, Deployments, Stateful set etc, but only Workloads.

Also, the Dora network layer is of the most basic kind. When you will need advanced stuff like service discovery, vxlan, DNS and load balancing, you will use Dora to command k8s pods.

A note for non Docker users

You can use this system without knowing Docker, but a little knowledge on how containers works can help.

Dora support the aggregation of multiple cluster (cluster in differents intranet) to form one system, where you can choose in which zone operate from the same interface. This is a physical division. Nodes and storage of a cluster usually are not reachable in another cluster.

There is also the workspace division, a logical division that allow the separation of resources.

So inside Dora there are three kind of resources:

The following picture should help to understand this division: 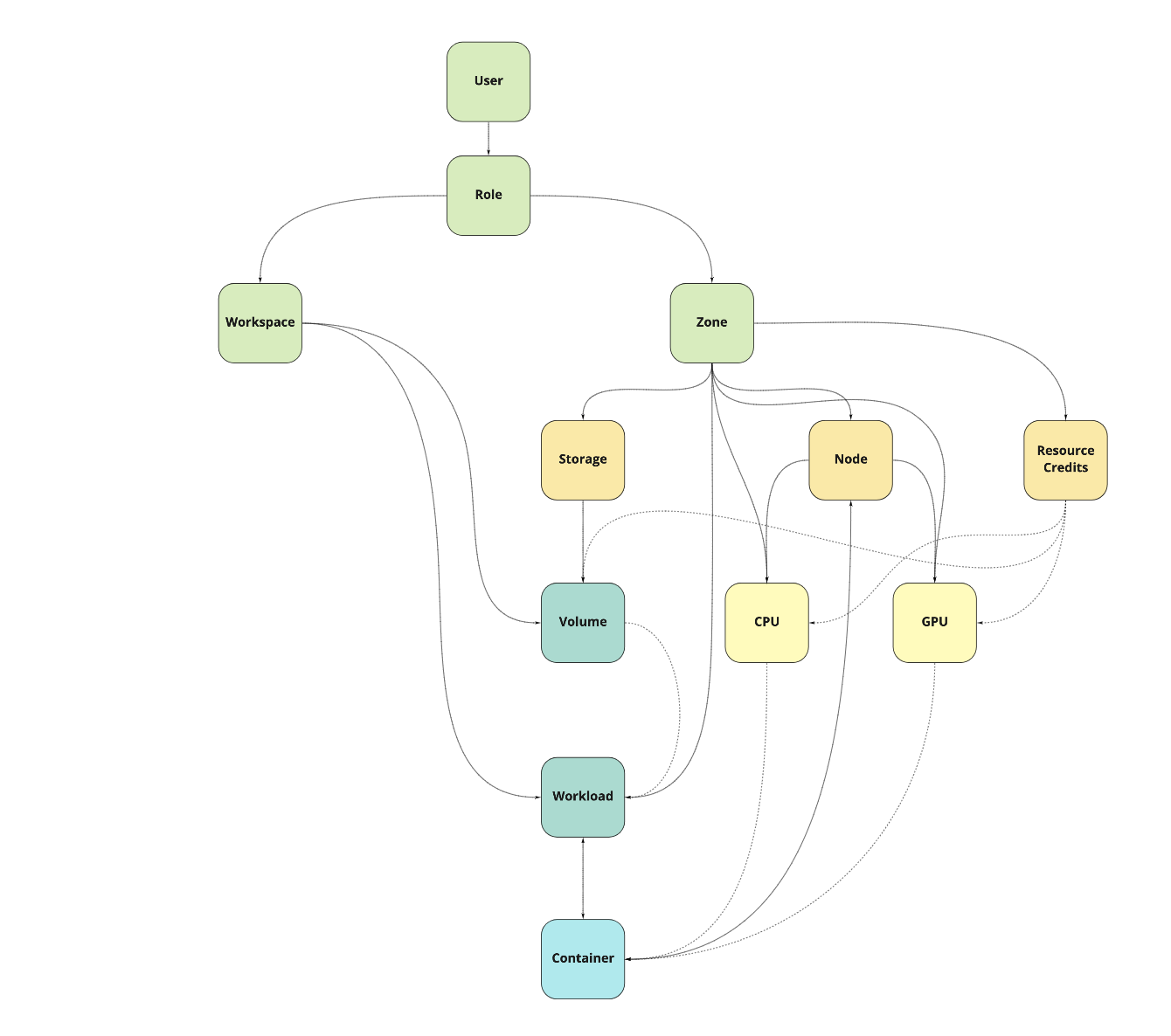 Starting from the previus division, we can now list all the resource kind available in Dora.

Every resource kind has is own YAML description, so in the following part we will use these format to explain resources.

Workloads are the main unit of Dora, the one the users need and use, the one that is why we have built this system.

Workloads are the definition of what you want: to every workloads can be associated one or more containers. Containers are build for you by the scheduler. The scheduler also watch differences between the running container version and the current workload version, so if you change something under the spec field in the workload, the scheduler will propagate these changes to the containers.

A workload definition can be really simple or a little bit less simple: we start from the simple one. All the fields in this example are mandatory.

In this example you don't specify the zone and the workspace, so the system will apply the default zone and your default workspace. Also you don't have volumes and networks, and only one replica.

A more complete example is the following:

Dora is heavily dependent on network storage, so the administrator should setup NFS storages instead of rely on local nodes disks.

Every storage has an associated zone:

Once an administrator has setup a storage, the user can use a volume associated with that storage.


Volumes definition are translated into Docker named volumes and, thanks to the underlying network storage, they can find and use their files on every node of the zone.

By default the mount path inside the storage is composed by workspaced and names:

You can override the volume mount path using the localPath property on volumes:

Nodes are where your container will run. On every node there is a dora.node service, that will report to the API server the status of the node and get the things to do.

Nodes are defined in the following manner:

Every user has at least one workspace, where it can run workloads, store data etc. You can clone your workspace to form another workspace, so you can organize your experiment in more ordered way.

Every cluster has at least one zone. Zones are used to partition the resources, in order to scale up with potentially thousands of compute servers and storages. For every zone there is at least one API server and one scheduler. The scheduler of a zone process the workloads only for the zone it has under control.

The administrator defines roles, like user role, admin role, and then assign one or more of these roles to every user. One can be a normal user for all the resources in a zone/workspace, but can also be an administor for the storage in zone.

An example of user:

Administrators can setup a credit system using the dora.creditsys service, and they can setup the "price" for some resources, like GPU.

The same resource can have different price for different zone.

Once a user reach is max usage credits, the dora.creditsys service will stop the user workloads.